The Joy of Learning New Things! Accumulating Many Experiences in Japan in Preparation for Starting a Business

We have a job-seeker with us who was recently hired as an engineer. We asked what factors brought him to Japan and what are his goals for the future.

*According to Staffing Industry Analysts’ ranking of largest global staffing firms for 2017.
Profile
Bui Manh Kha,
originally from Vietnam, has lived in Osaka for about three years since coming to Japan. After entering Adecco, he was assigned to work in Aichi prefecture. He specializes in machine development and design.
Chance：The Joy of Learning New Skills and a New Language

―What did you study when you were in university? While studying electronic engineering in mechatronics, I also studied about mechanical engineering. There are many technical schools in Vietnam, and you can learn the skills you want to learn in a short period and get a job quickly, so on a global level, Vietnam has a low percentage of students who pursue a university education. Despite that, considering my future, I decided to go on to university.

―What made you decide to seek work in Japan? After graduating university, I was working as a mechanical designer in Vietnam. I heard from a friend who was working in Japan what it was like there, and I felt that I wanted to go too. In addition, Japanese machine technology is more advanced than Vietnam’s is, so I also wanted to learn about various new technology, so I decided to work in Japan.

―Obtaining a job in Osaka is what brought you to Japan, but what made you want to change jobs to work for Adecco after that? At the company I worked for in Osaka, I was involved in product development, and it was a very valuable experience. I had a lot of trouble memorizing Japanese technical terms for machines, but the senior staff gave me rigorous support. However, being able to learn new skills and words is a joyous thing, isn’t it? While I was able to grow a great deal, I also felt I wanted to learn even more and accumulate more experience. Adecco has many clients, so the chance to work on a variety of projects was the deciding factor for me in joining the company. 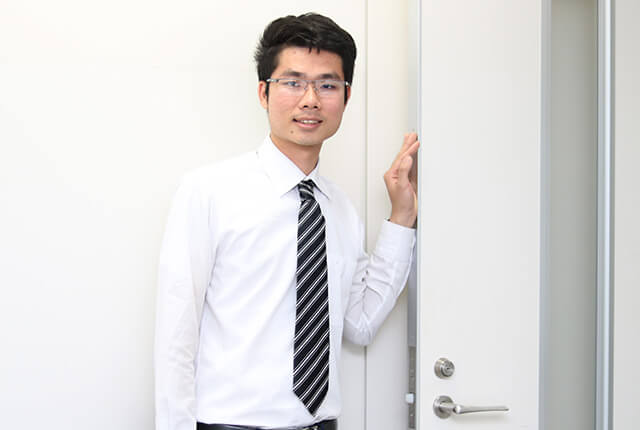 ―You’re fluent in Japanese; how did you study it? For the 10 months prior to my coming to Japan, I studied at a Japanese language school, but my Japanese ability really increased when I actually started working at my workplace in Japan. In particular, the first place I lived in Japan was Osaka, so the Japanese I had studied in Vietnam and the Osaka dialect were completely different. Like, in standard Japanese, “I don’t know” is “wakaranai,” but in Osaka dialect, it’s “wakarahen.” At first, these differences surprised me. As I made more Japanese friends, I learned the correct Japanese pronunciation that Japanese people usually use. Naturally, I also learned how to speak lots of Osaka dialect, too!

―How do you spend your days off? Since coming to Japan, I’ve gone to see various places, so I’ve become a total travel-lover. Many of the friends I made in university and Japanese language school before coming to Japan are living in Japan now, so I go and visit them in Kobe, Shiga, and Kyoto. In Tokyo, I went to Disney Land, and it was wicked fun! I also went to Universal Studios Japan in Osaka about three times.
I’ve enjoyed traveling in Japan enough now, so recently I’ve spent a lot of time participating Japanese language classes provided by volunteers at the Osaka International House Foundation. People from a variety of different countries gather there, so I’ve made new friends, and I’ve learned some English.

―What place do you like best in Japan? Nagoya. There’s a big park near the station that I really like. By coincidence, I was assigned to a company in Aichi Prefecture, where Nagoya City is located, so I was quite lucky. 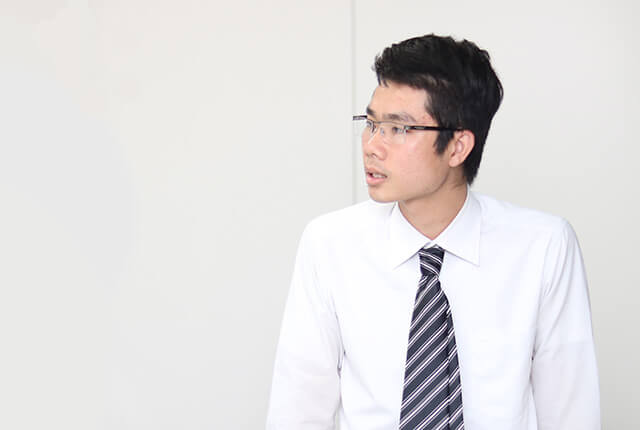 ―You’re finally going to be sent to a client as a full-time employee of Adecco; what was the process like for determining your assignment location? I told Adecco my desire to work at a company involved with mechanical design, and they came up with four candidate companies. Then, the Adecco manager arranged interview schedules with each client, and taught me basic interview manners. At the client offices, we discussed whether or not I would be able to make use of my skills and experiences at their company, and whether or not they would be satisfied with my abilities. Ultimately, I was assigned to the company where my interest and the client’s interest in each other matched.

―You’ll be moving from Osaka for the new job. Is your preparation going smoothly? Adecco helped me search for a home in Aichi Prefecture. For me, three things—my job change, moving, and my visa renewal—all came up at the same time, so even though I’ve lived in Japan for three years and have lots of friends, doing all of the paperwork at once was difficult. Being able to use Adecco’s support system was very helpful for me.

―Tell us your dream for the future. First, I want to make progress at the company I’ve been assigned to work at. The person who will be my supervisor has told me that once I understand all the work related to development, I’ll be able to try my hand at assignments in the design division. In the future, I want to start my own company in Vietnam, so for that reason, I want to learn a lot here in Japan. By building up small steps every day, I want to make my big dreams come true.